A downloadable game for Windows, macOS, Linux, and Android

What if you're cursed to make others laugh?

The 'Jester' is an entity who grants children happiness, but he was just another persona of myth... Until one day he appears on your windowsill and bestows his powers upon you. Now you're inflicted with a pun-curse, and thus begins your journey to cure yourself!

Upon changing schools, you meet three boarders who seem to have something to do with your curse...

But little do you know that your curse isn't really what it seems to be... 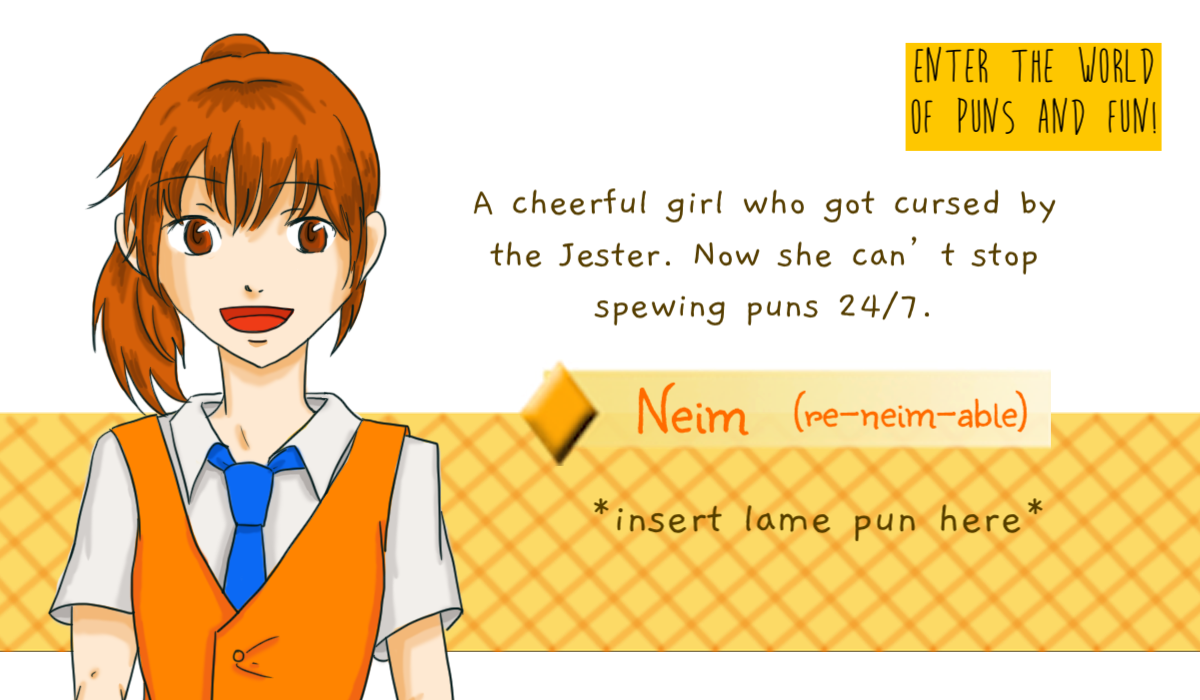 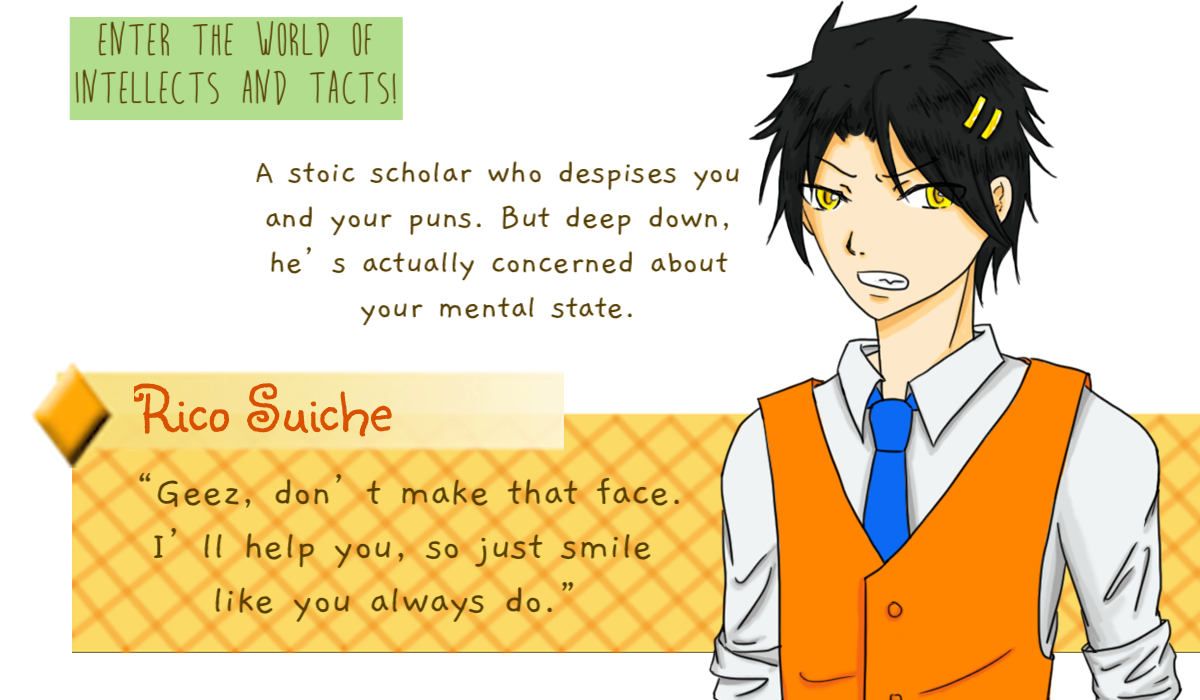 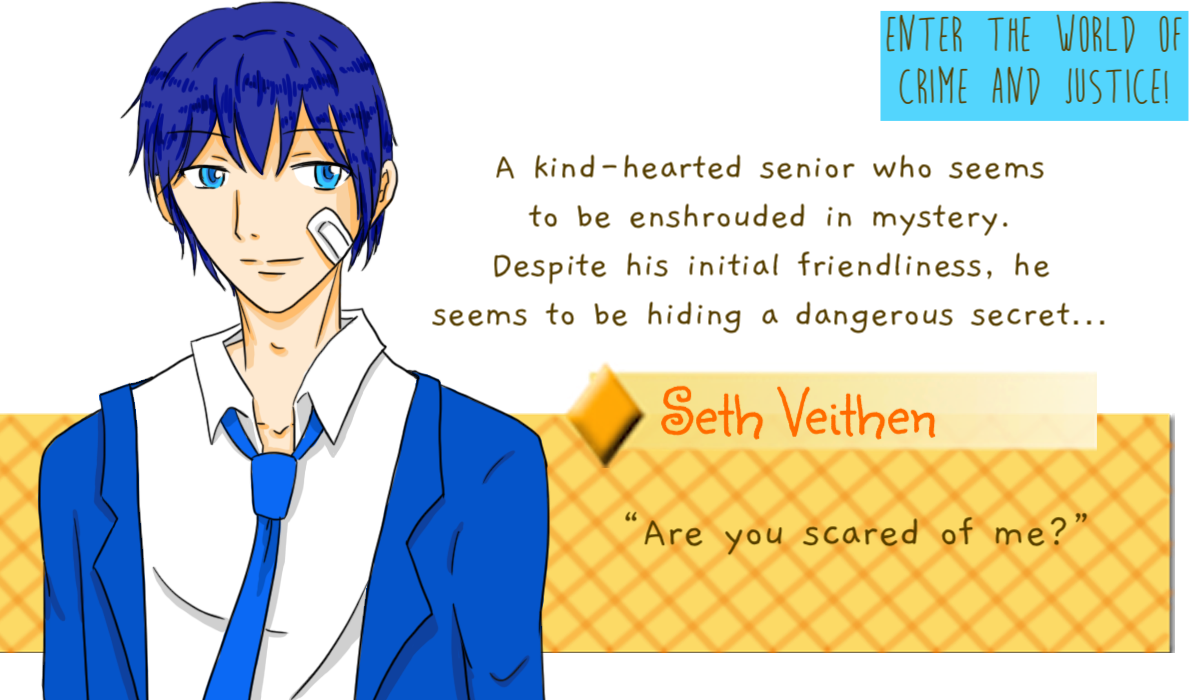 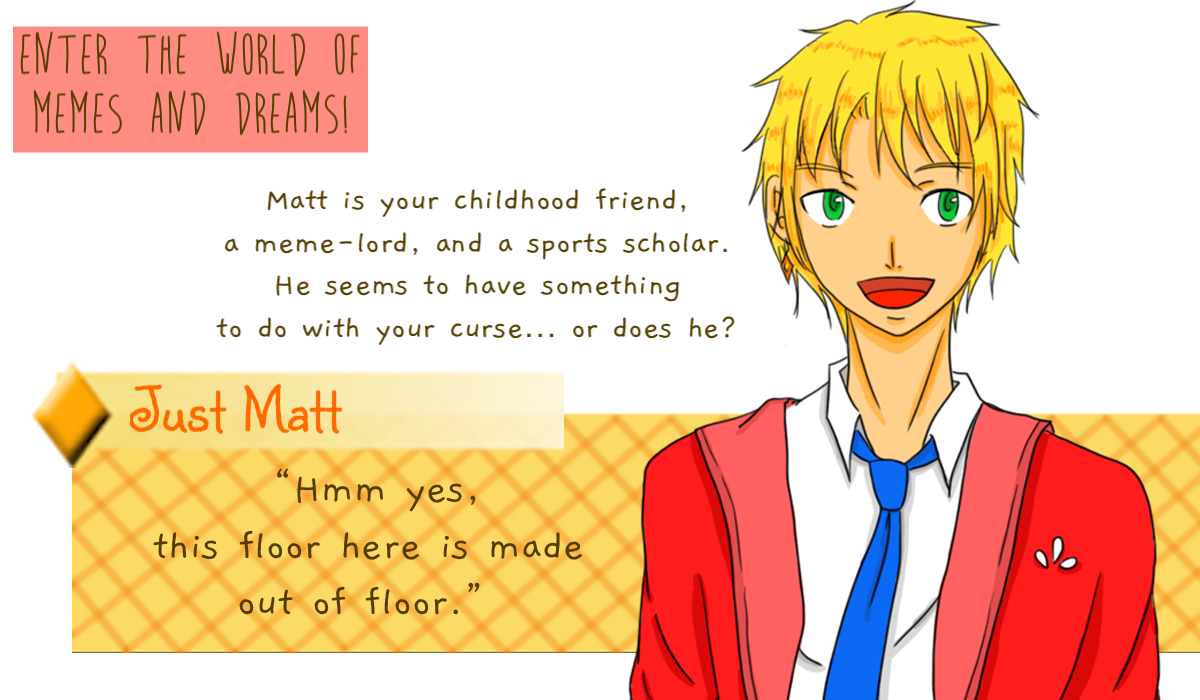 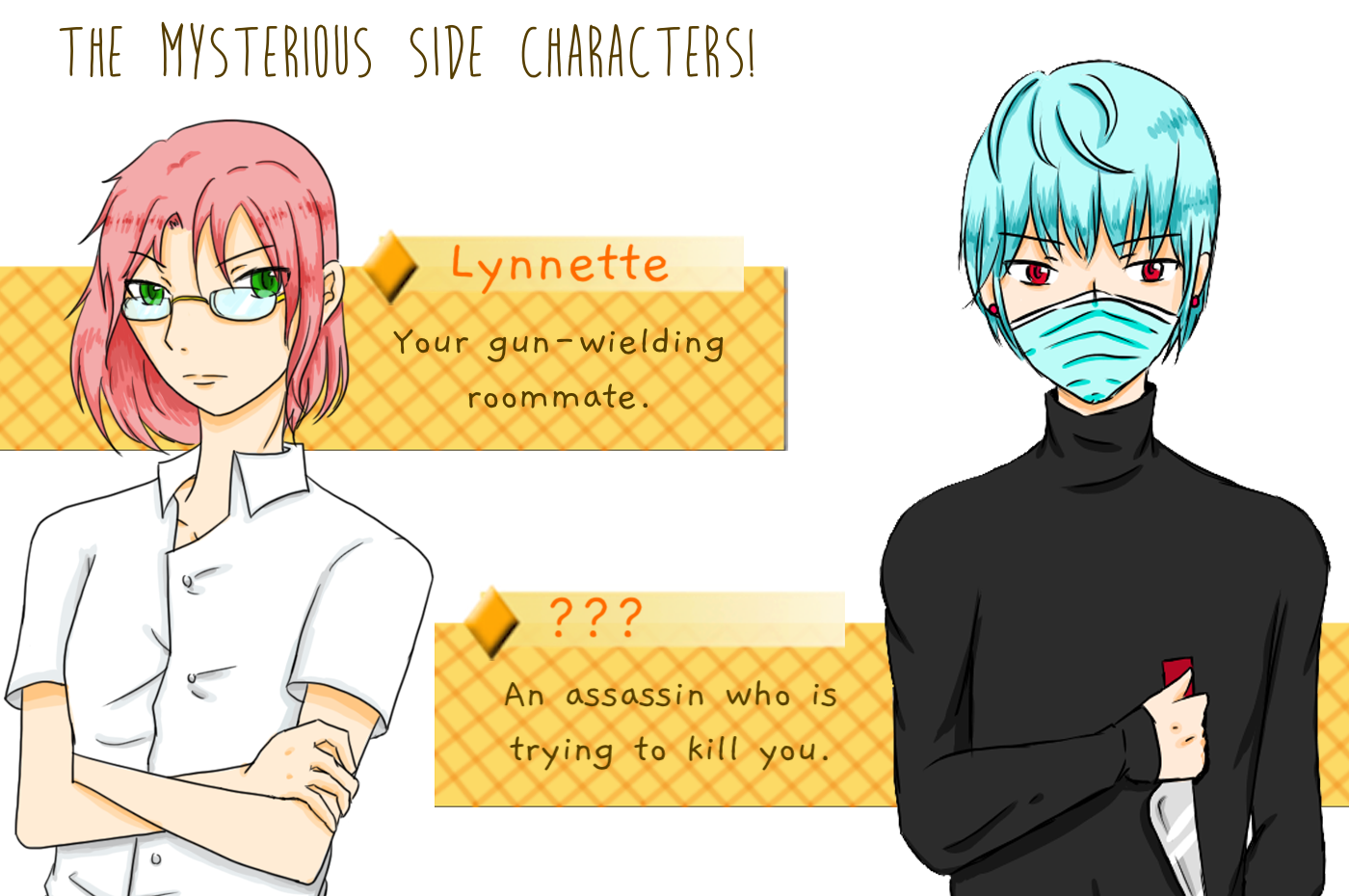 Let me know what you think about this game! It would really help me improve my skills!

For Mac users, you might need to go to system preferences and allow the app to run.

Sal the Salmon Shark107 days ago

When I read the premise I thought it would be more like a parody game, but I actually enjoyed it a lot. The comedy is great but without being overbearing, I liked the references and the 4th wall breaks, and how likeable the characters were. You sympathise so much with the MC and just want her to be happy (sorry, I don't have the heart to do the bad endings ;;-;;)

I think my favorite route was Rico's, because of how much they help each other to gain confidence and both of them evolved at the end.

If I have to nitpick, aaaah, I wish the endings were a bit longer, or at least a "where are they now" epilogue, but it really exceeded my expectations of a game I thought it would just be a silly parody, and I hope to see more of your projects in the future!

Hello! I'm glad you enjoyed the game! I'm really happy to know that my (crappy) sense of humour resonated with you and that you liked the characters! Haha, it's alright, in playing games I also find it difficult to play the bad ends after I got the good end.

Hee hee, I realised most people prefer Rico's route! I had most fun writing his route too!

I'm sorry the endings were short... I have this really bad habit where I end the game abruptly once the plot is resolved. I'll remember your advice the next time I make another VN. Thank you so much for your meaningful comment and stay tuned~

Now that the game is 3.0 I thought to make a separate review for Lynne's side story!

Lynnette's story unlocks after you've gotten Seth's good ending (so her story and Matt's route both open up at this point). The reason for this is Lynne's story is actually an extension of Seth's route - it happens right after the events before the 1 year timeskip. This time, instead of Neim, we are in Lynne's shoes and learn her mysterious backstory. She works with Akila for a special mission they've taken upon themselves to find out more information.

If you liked the intensity of Seth's route brought to this comedic story, Lynne's route surely won't disappoint! But don't think that means this is devoid of humor - whilst there is a severe lack of puns due to Neim only appearing briefly, Lynne's witty sarcasm and surprisingly cringe tactics will have you rolling!

I also enjoyed the tender moments in this route as well.

Both Lynne's route and Matt's route, which unlock after Seth's, happen in this manner for a reason - they reveal a truth. Lynne's truth on her route, and Neim's on Matt's.

Honestly, this game never ceases to amaze me. Despite its wonderfully comedic premise, there's some really cool and engaging plot points going on that will pull you in and keep playing!

Hi hi! Thank you so much for playing Lynnette's side story and for leaving another review! It really brightens my day and also encourages me to continue making more of comedic VNs like TPPM in the future! Heheh I'm quite proud of the plot twist but really though, I'm happier that it could entertain you. Cheers!

will lynnette eventually be a love route

Hello, no. It's a GxB game, so Lynnette's is just a side story, which is already out btw!

I finally finished this game! There's still 2 (I assume bad) endings I need to get, but aside from that, it's basically finished! Anyway....

I'm going to say overall, even when I first played it, there was a lot of unexpected things about this game. Like some of the more intense plots that Seth's route introduced took me by surprise (a pleasant surprise). Rico's route I think I had the most fun on and enjoyed the most (it's hands down my favorite), because especially since things were kept vague on his route, it made the mystery more interesting of Neim's pun curse despite being the least involved with it. But the stage play was the best scene! I loved it. The reveals on Matt's route was totally unexpected. I also loved the cameos from The Clock Chronicle.

Overall, this was a ride. Like a wild ride. I came in expecting a ridiculous mystery and a ton of puns (which we got!), and left with a lot of.... well I didn't expect that haha, intensity. Sometimes it was disappointing when Neim's pun spewing died down in later parts of the game, yet at the same time, it made her spewing them randomly all of a sudden that much more hilarious. Honestly, this is the kind of game that I like--it doesn't hold back on being fully creative, and I like how everyone's routes were completely different from each other.

Also, characters. I loved all the characters, they were unique and lovable in their own way, and Lynnette is freakin' best girl I am excited for her story to be added in the next version of the game!

And last but not least, I LOVED THE TRIVIA BOOK! The extra info, early designs, and bonus sketches were a pleasure to the eyes, and I also liked how you had all the CGs in there to gaze upon. Excellent work! I loved this game, it really lifted my spirits, made me laugh, kept me intrigued, and sometimes had me on the edge of my seat!

Sorry this review is sort of a mess, but yeah, I loved it and I hope to see more visual novels from you in the future! Your mind is really amazing! You know how to take your audience by surprise, and in a good way!

Hi hi! Thank you so much for your comment and for enjoying the game!!

I'm glad you didn't expect the intense stuff going on (I love surprising people) and I love Rico's route too! I had a lot of fun writing the stage-play scene- it actually foreshadows lots of things heheh. I'm happy the plot twist was unpredictable! I tried my best to give hints of the truth in Rico and Seth's route.

Yeah, at some parts, especially in Seth's route, Neim's puns visibly decreased... and fyi, no, I didn't run out of puns, but I thought that it isn't really the time to spew puns when your life is at stake. Hahah.

Glad you liked the characters! I tried to make them relatable and yes, Lynne is best girl! I'll probably upload v3.0 today or tomorrow. I'm done, but I just have to test it for a while.

Ahh thank you so much for your kind words, it really means a lot to me! I'll be looking forward to your next games (and our collabs) too!!

Hi, I'm not sure but probably in around 1-2 months' time. Or shorter. Or longer. Haha.

please do make an akila and lynnete route or even a main char. lynnete route! i loved the game and hope that you implement more cgs in the future!

Ayy ok I'll work on it! Thank you for playing the game! I'm honored you liked it! And haha it's surprising you want to see my crappy CGs but ok

Ah thank you! I'll do my best to improve my skills!

When I try to install it on my phone an error with the message 'app not installed' pops up. This has happened before with other games. Can you make an android armeabiv7a version? If you know how to, I would really appreciate it!

Of all the otome-type entries in NaNoRenO (I think I got through all of them) this felt the most otome-like, actually! It followed the standard setup and kept a good, constant tempo. I'm only sad the puns didn't penetrate as deeply as the setup suggested, but I love Neim's energy and how she literally does not have a sad face. Love a punster of action.

I'm a nerd so I enjoyed Rico's route (as well as Neim's struggles in the club because haven't we all experienced something like that), but I also like memes so the fun times of Matt's route were side-splittingly MAGNIFICENT, especially the last choice. I also appreciate well-done bad endings so Seth's bad ending turning into high-octane fuel was emotionally heavy but oddly cathartic. Lastly, "yes" to Question 2! If it's just that one route and the same timeline, I'd like if it were within the same game.

Hello catcracker! Thank you so much for your kind and meaningful comment! I'm glad you enjoyed the game! Yup, to be honest, sometimes (especially in Seth's route), I was too focussed on the action bits that I forgot all about Neim's pun curse... Haha.

I had so much fun working on Matt's route, so I'm thrilled that you liked the meme references (cuz people don't usually go for meme-intensive otome games). Rico's route was partly based on a real-life situation, so I guess it's more relatable. And Seth's bad end... boy I had so much fun writing the angst. I'll work on Lynnette and Akila's route sometime in the future. Thank you once again for the valuable feedback!

Hello! I just downloaded the game and it looks so fun! :D I was wondering where the cheat sheet was and then I realized that the game wasn't updated yet xD I actually wanted to check the cheat sheet since the last math question looked unsolveable :') Since adding two sides of a triangle can't be less than the third side. And then I realized it was an impossible to solve question xD I love the MC so much! I know I'm going to have fun playing this game! owo

By any chance is Rico a tsudere?

Hello, harmonywish! Thanks for playing the game! Sorry, I just finished uploading the new version of the game, so I think the new cheat sheet should be there now!

For the math question, actually one side is suppposed to be square root of 73, not 73, but the square root symbol wouldn't show up for some reason hahha. Also, this question is supposed to be solveable... Like my friend solved it, but I have no idea how to do it.

And yes haha, Rico is a tsundere :)

wow.......i am speechless by how amazing this game is. i loved playing rico's route it was so much PUN ahaha. but seriously, this was an amazing game and i really enjoyed playing it :). #ricoisbestboy

Thank you for your kind comment! I'm glad you enjoyed it!! I agree Rico is best boi hahaha :D

Ahhh thank you so much for your kind comment! Glad you enjoyed the game! I'm still working on Matt's route, thanks for your patience! 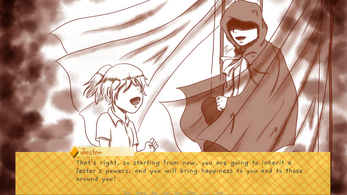 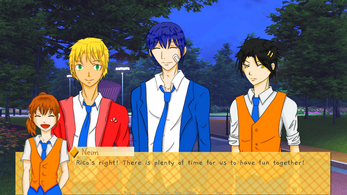 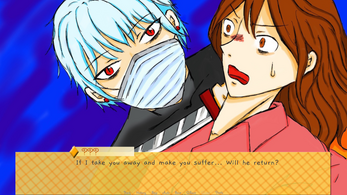 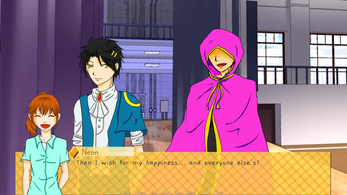 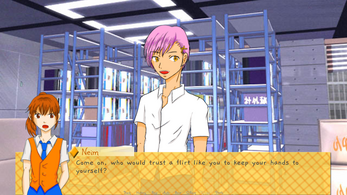 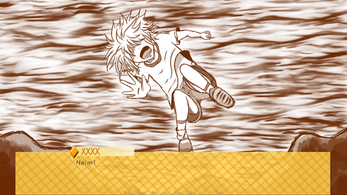 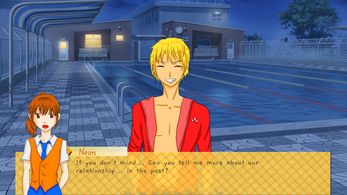 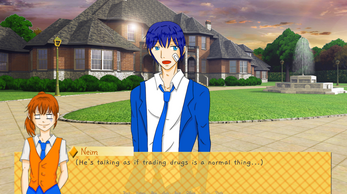 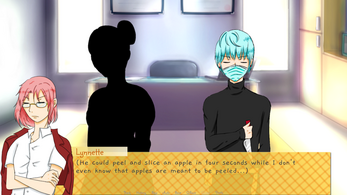